A native of Los Angeles, Norman Krieger is one of the most acclaimed pianists of his generation and is highly regarded as an artist of depth, sensitivity and virtuosic flair. As the Los Angeles Times put it, “Krieger owns a world of technique-take that for granted. He always knows exactly where he is going and what he is doing. He never for instant miscalculates. He communicates urgently but with strict control. He is alert to every manner of nuance and at every dynamic level his tone flatters the ear.”

Myung -Whun Chung, Donald Runnicles, Leonard Slatkin, Michael Tilson Thomas, Jaap van Zweden and Zubin Mehta are just a few of the conductors with whom Krieger has collaborated. Krieger regularly appears with the major orchestras of North America, among them the New York Philharmonic, Los Angeles Philharmonic, the Chicago Symphony, Minnesota Orchestra and the National Symphony. He has performed throughout Europe, Asia and South America including tours of Germany, France, Poland, Holland Scandinavia, Korea, China, New Zealand and Israel. He recently performed at the PyeongChang Music festival in Korea. In September 2014, he recorded the Brahms Sonata Op. 1 and the Piano Concerto No. 2 with the London Symphony Orchestra under the baton of Philip Ryan Mann, which will be released on Decca.

He began his studies in Los Angeles under the tutelage of Esther Lipton. At age 15, he became a full-scholarship student of Adele Marcus at The Juilliard School where he earned both his Bachelor and Master degrees. Subsequently, he studied with Alfred Brendel and Maria Curcio in London and earned an Artist Diploma from the New England Conservatory, where he worked with Russell Sherman.

Krieger is the founding artistic director of The Prince Albert Music Festival in Hawaii. Since 2008, he has served on the summer faculty at the Brevard Music Festival in North Carolina. From 1997 to 2016 he was a professor at the Thornton School of Music at the University of Southern California. In August 2016 he was appointed Chair and Professor of Piano at the Jacobs School of Music at Indiana University. 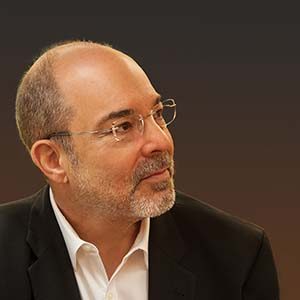